NASA has unveiled a prototype design for the Z-2 suit, the newest member of its next-generation Z series of spacesuits. The suit, still under development, is intended to meet a long list of ambitious goals, including full mobility on planetary surfaces and tolerance of hard vacuum. The new design, named “Technology”, beat out two other proposals (“Biomimicry” and “Trends in Society”) in a selection process culminating in an online vote.

The suit will allow an unprecedented range of motion for astronauts, including the ability to kneel down while collecting samples or conducting other work (an ability not available to the Apollo astronauts, the last humans to walk on a planetary body other than Earth). In addition, with the assistance of 3D laser scans and 3D-printing technology, the Z-2 is designed to be conformable and re-sizable to the upper torso of the astronauts, presumably improving both function and comfort.  The prototype is still an early version; the choice of materials for radiation shielding, impact resistance, and protection against abrasion are yet to be determined.

The Z-2 is not the only next-generation design for extraterrestrial couture—and it is far from the most svelte. Also in the works is Dava Newman of MIT’s BioSuit, which is intended to protect astronauts by providing mechanical counter-pressure, analogous to the way a pressure bandage prevents swelling (see Dr. Newman’s TED talk here). 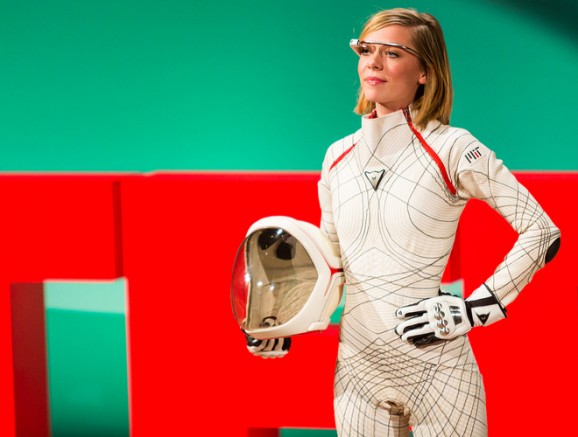 One advantage of a mechanical system is that the failure modes are very different from those of a pressurized suit, with the effects of a breach potentially limited to a single site rather than causing a catastrophic loss of air. One can imagine something like BioSuit being worn under a more classically inspired suit like the Z-2, providing an extra layer of redundant protection against depressurization. Currently, the BioSuit remains under active development, and has yet to be integrated with life-support and other essential systems.

Granted that the two suits are designed to satisfy different sets of constraints—speaking solely from an aesthetic standpoint, I know which one I’d prefer to wear.

3 thoughts on “Does this spacesuit make me look fat?”